Two years ago my wife, Linda and I, along with two other couples were on a motorcycle trip to New Mexico. We spent one night in Paris, Texas. The next morning, just outside of town, we spotted an old airplane sitting next to a building close to the road. I picked up the mike to my CB radio and called one of the other guys.

“You say you used to fly a plane like that one?” he asked.

That airplane was N255S, a Martin 404, flown for many years by Southern Airways.

This past May, Linda and I went on a trip to Arizona and purposefully spent the night in Paris, Texas. The next morning we found the owner of the Martin sitting in his pick-up in front of the truck stop where the plane was parked. I asked if I could take some pictures and he told me to take as many as I liked but first he invited us into the truck stop to see some of his memorabilia.

The owner was Isaac Newton (Ike / Junior**) Burchinal, a well-known movie pilot. Some of his credits include; “Flight of the Phoenix,” “Twelve O’clock High,” “Catch 22,” “The Great Waldo Pepper,” and “McArthur.”  He also was the pilot for Robert Conrad in the TV series, “Baa, Baa, Black Sheep.”

Some of his memorabilia included a photo with Gregory Peck in the film “McArthur.” Peck was in uniform and Ike was in a Flying Tiger uniform. He still has the jacket. He also showed us a stub from a royalty check that he had recently received. It was for ten dollars but after deducting taxes he only received $6.75.

He told us stories about how he broke into the movies. How one day he flew a fighter into the little airport behind the truck stop but before landing flew inverted over the restaurant. How a movie director sitting in the restaurant saw the whole thing and told him if he wanted to be in the movies to be in Hollywood Monday morning.

He also told of selling two airplanes to Howard Hughes and Hughes paying him twice what he was asking for the planes.

After talking for quite a while, we went outside to take some photos of the Martin. 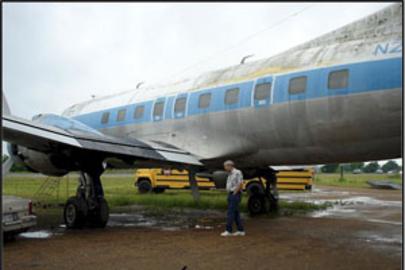 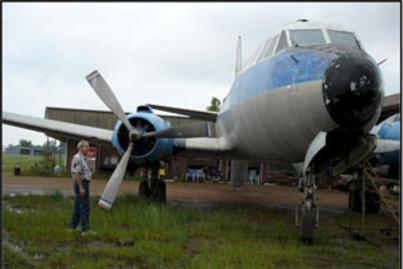 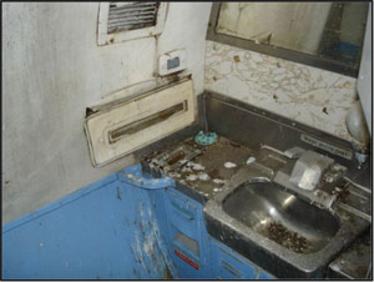 The porthole window in the blue room was broken. Just as I stuck my head in the door a bird flew in the window. We almost had a head-on collision.

Jim does a walk-around.

Years ago when Ike bought the Martin, the oil pressure-sending unit on the number one engine was in-op. He was either unable to find one or the cost was too high so he went to a parts store and bought an auto oil pressure gauge. He then punched a hole in the cowling, mounted the gauge, and connected it to an oil supply line. He then had his son monitor the gauge for take-off. Here, Ike shows Jim the makeshift oil pressure gauge. 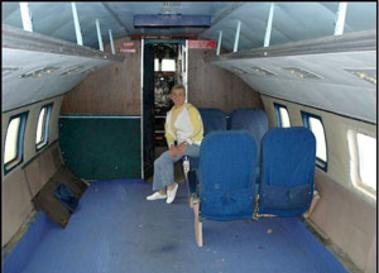 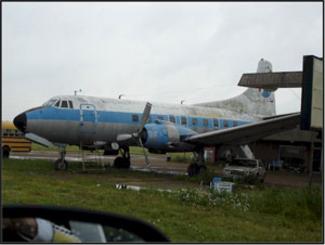 N255S is a tired old bird and hasn’t been flown in years. She now serves as home to hundreds of smaller birds. But she still has that proud look. With her tail held high and her black nose pointed forward she appears to have the spirit to fly once more but she would need a lot of help. Ike says that for $60,000 she can be yours. Anybody out there interested? 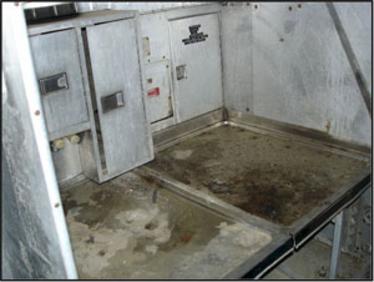 Linda Robinson in the cabin of N255S.  The seats, carpets and overhead panels appear to be the same as when the A/C was at Southern.

The cockpit. Some missing instruments but most are still there. 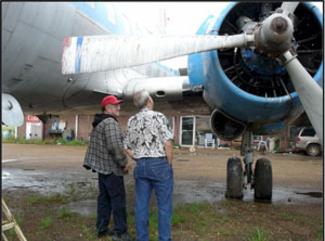 The Galley. I have had many a cup of coffee made in this galley.