"As I was surfing the net today, I remembered that Southern Airways had a scheduled stop in Vicksburg, MS when I was much younger (say 18 or so, which would be about 40 some years ago).

One of my good friends was the Station Manager for Southern at the time and I would go and visit with him every now and then, especially when the flights would come in (you always had the prettiest flight attendants).

Anyway, as I was examining your website today, I found the section for Lost Employees and immediately thought of my old friend and all of the things which were associated with him and his position at VKS.

In the section (Lost Employees) I went to the “M” section and found him to be at the top of the list, haven’t being heard from since 1962. A. B. Mackey………we all knew him as “Jackie”.

Here’s the bad news and I’m very sorry to inform you that Jackie Mackey passéd away many years ago, at a relatively young age. I don’t know the exact year, but it was probably in the 1980s.

He was a good friend, my Company Commander in the National Guard, and also dated one of my sisters for some time.

Again, I’m sorry to be the one to inform you of this bad news but I thought that you would like to know (for the record).

Jim Robinson and former movie pilot, Ike Burchinal next to N255S, a Martin 404, flown for many years by Southern Airways.

My name is Ernest E Head. I started working for Southern Airways in 1961 as "the Crew car Driver" making $2.00 per hr. I thought I'd be very well off within a year or so making that kind of money. The payment on my '58 Chevy Impala was $65 per month and my rent was $50 per month utilities furnished. After a few exciting months of driving the crew car I started working in "production control" in the old hanger. My bosses name was Curley, and after a few months I got on as a Jr. Mechanic.

I came home to Dahlonega every weekend and felt like a celebrity when I told the locals that I was living in Atlanta, that I was an aircraft mechanic. I worked on the check crew and the flight line. I left Southern Airways just before the purchase of the DC-9's, but I was there when we got the Martin 404's. We had to jack the nose wheel up to get them in the old hanger before we got Eastern's old Hanger. I will never forget how it seemed that everyone tried to help the "little hillbilly from Lumpkin County". I don't remember all the names, but I will always remember the extra effort put forth to make an aircraft mechanic out of a kid fresh out of the boondocks.

"I have a story of how the airlines have had to change in recent years. I was coming home from England in 1961 and flew Southern from Memphis to Greenwood, MS. When we left Memphis , after we were airborne I went forward and stood at the door of the cockpit between the Captain and Co-pilot and only had to go back to my seat while we landed in Oxford. Isn't it nice to be able to trust? I enjoyed Southern more than any airline I flew. 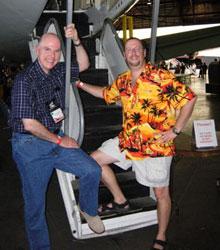 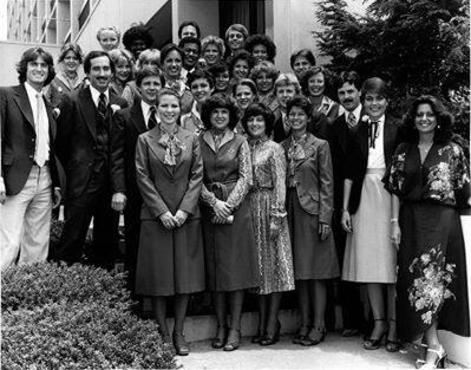 Keith Mock, RC- NWA - Flight Attendant - DTW (on the right)and David Stringer, Southern-Republic-Northwest Flight Attendant - SFO, on the aft stairs of  Martin 404, N145S. The picture was taken on a trip to Kansas City, MO when Keith visited the Airline History Museum.  David said that N144S had many memories for him.

​​Click here to view pictures and history of N145S. 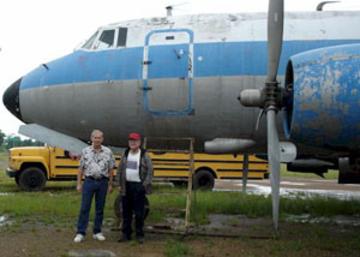