When Gloria McCullar first stepped onto an aircraft as a Southern Airways Stewardess in 1964, air travel was glamorous, first class was First Class, and passengers still appreciated the marvel of being strapped into metal tubes and hurtled through time and space from one point to another.

But as Gloria settled into her new profession, her questioning nature and ardent desire for a safer workplace opened her eyes. Not one to mince words, she opened her mouth. And in a flurry of charm, sharp wit, and uncommon common sense, “Miss Gloria” began a forty-year crusade as instructor, investigator and innovator which, upon her retirement this December, has produced a legacy of safety achievements that has forever changed the industry.

In the early 1970’s, Gloria found a niche as a Recurrent Training Instructor and Competency Check Flight Attendant at Southern Airways, which would later be merged into Republic Airlines. These were the formative years, where with southern grit and the heart to match Gloria first worked to provide Flight Attendants with realistic, hands-on training and tools to ensure preparedness as the vital link to passenger safety and survivability.

And change came swift and hard throughout the 1970s, 80s and 90s: airlines merged, unions changed, the industry aged, stewardesses became Flight Attendants; time and again airplanes crashed, and authorities turned more to crew members to help sort through the mysteries of disaster.

First at Southern, then at Republic, and finally at Northwest Airlines, Gloria answered those changes, using her experience as an instructor to propel her into service as an investigator of four major crashes:

Elliott credits Gloria’s accident investigative efforts as proof of “the absolute value of Flight Attendant knowledge and experience being essential in the investigative process.” “Within FAA and NTSB circles, Gloria has been known for her factual approach and uncanny ability to see the cause and have a good feel for solutions.”

Although much of Gloria’s experience springs from hours spent sifting through debris-laden fields of twisted steel and broken airplanes, it was a visit to Republic Airlines Atlanta hangar one day that eventually led to the innovation of the “Flight Attendant Green Advisory Light,” a.k.a. the “Green Light.”

“One day I was at the Atlanta hangar during a heavy check on a DC-9,” Gloria recalled. “I got on the airplane and saw that the annunciator light panel was wired for another light – I spoke to ALPA about the sterile cockpit FAR coming into effect, and asked ‘Why can’t we use the green light to indicate that the cockpit is no longer sterile?’” Question to words; words to report – report adopted and questioning words change industry forever.

When the company reconfigured the DC-9 fleet during the mid-90s, Gloria noticed that the new overhead oxygen compartments could no longer  be popped open with a pin. “The PSU tool was promoted by Gloria in an effort to be able to consistently have an effective means to open a PSU unit and access oxygen masks if the compartment failed to open,” Elliott said. “With that suggestion, the PSU tool is now a standard piece of emergency equipment on all aircraft.”

Throughout this time, four unions and three companies relied on Gloria as the 24-in-7 first point of contact as the Safety and Health Emergency Response/Go-Team representative. “Gloria manages to answer all related emergency response and safety questions as they come to her,” said PFAA President Guy Meek, who has called Gloria a friend and associate for more than 30 years. “She always defends Flight Attendants with respect to safety related issues. For those of us who have had the pleasure of speaking with or flying with Gloria, these past years realize what a great loss it will be when Gloria retires.”

Simultaneously, Gloria has from time to time had to care for her 84-year old mother, who for the past year-and-a-half has relied on her daughter to take her to kidney dialysis appointments. “When I’m not flying I spend most of my time helping my mom,” Gloria said. “It’s kind of tough to fly, still volunteer and do this too, so I’m retiring early to care for my mom.”

What I’ll miss most is the camaraderie of fellow crew members and my safety work."

Gloria’s legacy will live on as we reflect on the improvements made as a result of her untiring efforts. Her dedication to our ranks is the epitome of a true “safety professional.” Thank you, Miss Gloria, and best wishes in retirement.

June 19, 2004, Memphis Outbound and Retirement. For those of us who didn’t get to fly Captain Bill Rogerson’s last trip outbound from Memphis on June 19, we not only missed flying with great old friends – three of the Flight Attendants and the Purser were also former Southern – we also missed a treat at the gate.  Captain Rogerson composed a parody of Thanks for the Memories and sang it to the passengers and on-looking crewmembers before the flight. So in lieu of actually being there, you will have to use your imagination. It was also the last scheduled trip for Gwen Tutor before her Retirement, so I’m sharing the picture of Captain Bill Rogerson and Flight Attendant Gwen Tutor onboard the DC-10.

Capt Rogerson singing at the mike.  (So he can't deny it) 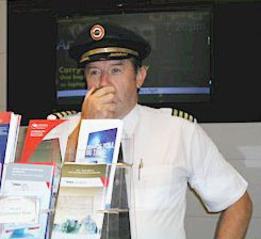 SALUTE TO A RETIRING SAFETY PROFESSIONAL

Co-workers threw an airborne retirement party on a round-trip flight to Las Vegas and left her to reflect on a career that spanned multiple mergers and sea changes in fashion, job responsibilities and security.

Fellow flight attendant Sharon Glover said Marcellini, 63, had a knack for connecting with passengers and drawing on her strong faith to get through turbulent times. "She's just a very considerate, unselfish person."

Marcellini was one of highest-seniority former Southern Airways attendants still flying for Delta Air Lines and among an estimated 12-15 still working out of Delta's Memphis base. Glover and another Southern alumna, Janet Childress, accompanied Marcellini on her last flight, when a passenger won a door prize for guessing closest to the trio's combined years of service: 117.

One co-worker dubbed Marcellini "the flying nun." Glover recalled sitting, and praying, with her on a flight into Montego Bay, Jamaica, when the plane encountered extreme turbulence.

"I looked over at Virginia, and she was doing the Catholic cross. I said, 'You do your Catholic thing and I'll do my Baptist thing.'"

Marcellini said, "One time I remember saying the Hail Mary, and I didn't care who heard me, because of the turbulence."

Her first job in January 1970 was flying on call out of Fort Walton, Fla. Because there were no cellphones or beepers, "I had to sit in my apartment for 21/2 weeks. We were not allowed to leave without permission."

Southern became part of Republic, which merged into Northwest, which was absorbed by Delta in 2008.

Uniforms were high fashion in the 1970s. Her first was a coral-colored, two-piece Jackie O ensemble. Also memorable: a black and white paisley print minidress, supplemented with black lounging pajamas onboard the plane.

The emphasis on fashion and appearance carried other baggage.

Stewardesses were supposed to be single. Northwest didn't want flight attendants to be more than five pounds over their hiring weight. Marcellini was told she'd have to quit if she got braces on her teeth, but she did it anyway.

Marcellini remembered greeting the crew of a 1972 flight that had been hijacked to Cuba, upon their return to Memphis International Airport. "Our security (emphasis) started then, but with 9/11 it intensified."

She was at home, scheduled for a three-day trip, when Sept. 11, 2001, terrorist attacks halted air traffic nationwide. "My sister called me and said, 'You're not going anywhere.'"

Marcellini loved having celebrities on board. "The Osmond Brothers rode with me, and 9-year-old Donny slept with his head in his father's lap. There was Kiss, Gene Simmons sans makeup, and Three Dog Night."

More recent passengers included Sigourney Weaver, Kevin Bacon, Ginnifer Goodwin and Jon Voight. "I leaned over and whispered (to Voight) 'You were awesome as Pope John Paul II.' He only smiled."

Where attendants once served beer and pretzels and cocktails, they now have training in cardiopulmonary resuscitation, defibrillator operation, firefighting and evacuations.

Supervisor Dustin Perry worked the Memphis-Las Vegas leg of her last flight so Marcellini could soak in the moment. Glover arranged for smiley-face balloons, a "Virginia Marcellini: Queen for a Day" banner and in-flight games for crew and passengers.

Marcellini said, "I will miss the places that I have visited, the interaction with the passengers and camaraderie with the crews." 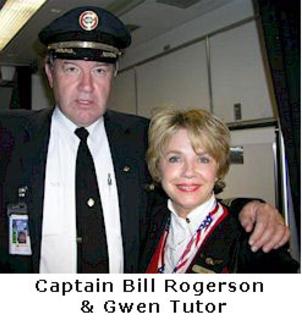 And here’s the words:

Thanks for the memory: Of things I can’t forget, of journeys on a jet, Of wondrous days in Amsterdam, Orlando and Marquette. How lucky I was.

Thanks for the memory: Of happy days by the sea, sunsets in Waikiki, Beautiful days in London and then dinner in ole Paree’ How wonderful it was.

Trying to exceed your expectations, Even in the worst of situations, Calming passengers fears and apprehensions. I always did my best. Just like all the rest.

So thanks for the memory: Of check-rides before dawn, Of layovers never too long, Of flight delays and all night flights so very very long. I’ll miss it so much!

Folks I know it’s a fallacy: That grown men never cry, folks, that is a lie. I had my bed of roses, but then, forgot that roses die. Why oh why oh why?

But thanks for the memory: Of every approach a thrill.  I’ve been through the mill. I’ve lived a lot and learned a lot, stayed up all night and still; Awfully glad I got to fly you Wish I could forever still.

And thank you, yes thank you; I’ll miss it so much!

Captain Tony Sanson completed his last flight after nearly 34 years. Tony began his career with Southern as a Martin 404 co-pilot based in Memphis in January 1973. On his last flight he was accompanied by his fellow class mate one number junior to him  Rusty Haley. The final flight was #72 from Ngo-Dtw in the 747-400. Tony never realized that he would go from Tupelo to Tokyo. We wish Tony and his wife Sally a wonderful retirement.